Its a long time since I have posted anything!

I'm writing this from memory...at the end of September 2013!

September 2013, I was going back to BG on the 5th, made a late decision to not go in the new van i bought to replace the one the Hungarian fuel killed, I decided to go in the car....
Problem....engine is in the factory, so I started work, new engine half into the car....engine slipped! , I caught engine and all seemed fine, the crack from my arm as it hit the gearbox didnt seem that bad so I kept going for a few minutes, then the pain set in....arm is fractured in 3 places!

So no fixing car, no driving to BG as its too far to go with a broken arm, next trip put off till November.

I travelled over in a van this time, I needed to take some things over and bring some products back from the factory, no real problems this time, but as soon as I put Hungarian fuel in the van it never ran correctly again, it still worked but not well! , It did well enough though it got me to BG all over BG and back again

At least the Danube bridge 2 was finished, saved waiting for the boat, customs took a few minutes and we were through, much faster drive now due to the new motorway being open, just the bit near Vidin to Sofia thats slow now,  This trip we stopped in Germany ,Hungary, and in Bulgaria on the motorway, much better to do more stops on the way.

Ive found out why we don't have many slugs or snails, but lots of snail shells, these beetles eat snails, they are quite rare and quite large about 1.5 to 2 inch long! , its a Blue runner beetle ( Procerus Scabrosus )  its rare and a protected species 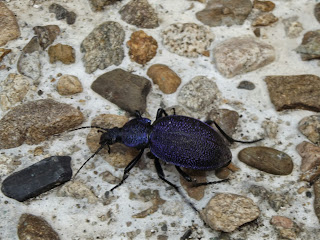 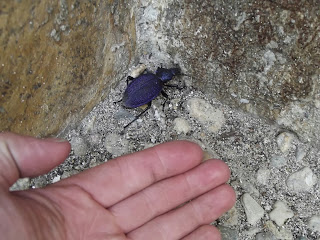 We also have a couple of these on the house, swallows nests, not so many insects around this year so maybe a good thing! 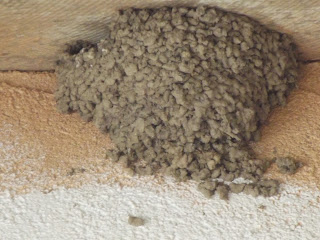 Quite hot again this month, measured with my new buy today.... a 1 Lev thermometer 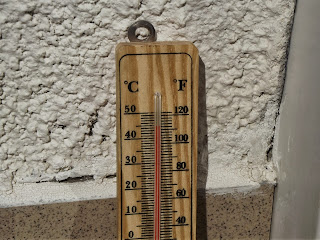 Cherry plums from the garden, trees and trees of them 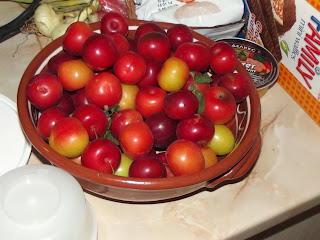 Cherries from the massive tree, takes a 5m ladder to get to the lowest branches 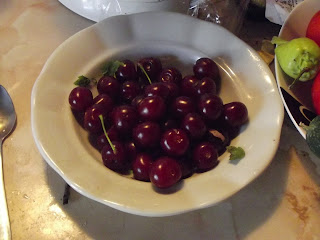 Figs from the tree 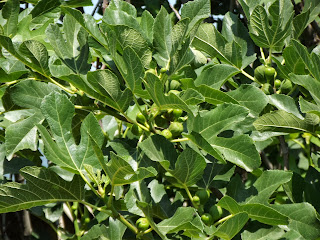 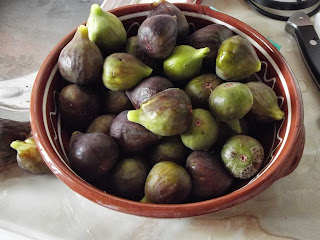 Its quite a large fig tree about 12 foot or more tall, growing against a wall, i have seen no real damage from the sub zero winters here , the trunk at the bottom is over 6 inch across. a few dead branches here and there ,but only small ones.

June to July 2013 I Spent about a month in BG renting the house in Yulievo, Painted one of the downstairs rooms in the house in Vetren, smashed some of the concrete kitchen sink out...I need a pickaxe....massive hammer for 30 lev from praktis,
I did some work on the garden,strimmed it all again, dug some roots of the elder out after 3 weeks of waiting from applying some super strength new formula roundup proactive, I also planted some plants in the garden , a few mint plants, a pomegranate tree, some raspberries, a red currant, some rhubarb

Upstairs is now finished, needs some work on the front door, but its functional....I need to keep the old door, Its a traditional feature of the house no chance UPVC one is to be fitted, the roof is fine,the rendering still needs work on the front and one end wall but is waterproof so fine for now

Working on the garden I removed some more clematis vitalba, a great lump of it on what I thought was a fence, turns out I now have another gate!, right by the old mini market at the bottom of my garden, there is even a concrete driveway across the mini market and right out under the rest of the clematis it goes to the road, a concrete drive! something I didnt think I would see 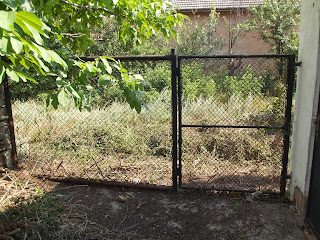 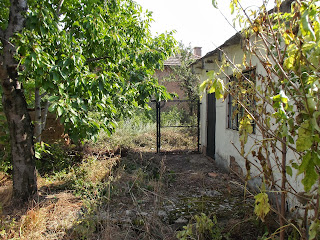 I have hundreds of plants in pots to bring here from the UK to plant, the ones I brought this trip I kept them in pots a couple of weeks to get them used to the heat, in and out of the sun, the raspberries all shrivelled but then shoots came from the pots and the new shoots were fine in direct sun and 40C, Rhubarb plants were the same they old stalks never recovered but new stalks were fine , mint just loved the sun straight away, after a couple of weeks in pots I planted them in the garden.


Raspberry plants from Aldi , grown in pots since February 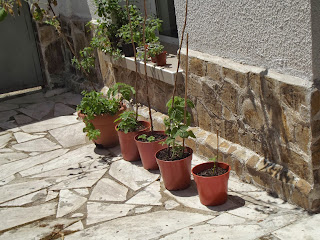 Rhubarb plants, I planted 3 of these 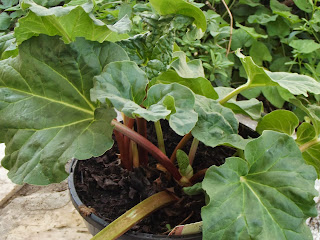 Mint in the garden, I hope it will fill this area 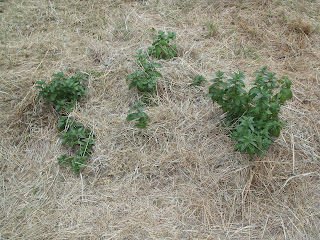 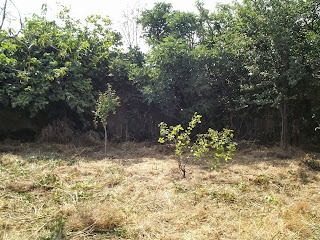 Early 2013, I managed to get back to Bulgaria a few times for a week or two every month for work in Vidin, but no time to get to do anything else, holiday planned for June.

Christmas 2012 , I got back from the UK to Vidin for a week or so , took a day out to drive to Vetren to check it was still there, snow was not that bad, just a couple of inches in a few places round trees, not that cold either! , not like back in January!
Posted by My-Bulgarian-House-Renovation at Monday, September 30, 2013 No comments:

Back to Bulgaria Early September 2012

We left early in September around the 4th.... ( im not really sure! of the date ) , driving again ,we got to Dover after a dreadfull drive full of traffic jams and found a passport missing ( it was checked when i asked over and over about it before we left.... )  So back up to Liverpool , quick sleep, back to Dover........

We eventually got on the ferry, normal route on the other side....Dunkirk, Belgium, Netherlands, Germany, Austria, Hungary, Romania and into Bulgaria at the Vidin ferry.

We stopped off on the way at the airport hotel near Vienna at 10PM at night, it was about 100 euros the night , but there was a Burger King, we tend to stop off in Hungary at the small hotels just away from the services but this time i was way too tired due to the strange start to the  trip.

The only food available at that time of night ( unless i got the camp stove out ) was Burger king, chicken nuggets, chips and strawberry milkshake......it was better than it sounds when you have been driving for so long, I didnt think they would like the camp stove in the hotel car park....

Early start next day to get past Budapest before the traffic built up....Didnt work as there had been a multi car pile up, we turned off and went cross country through Hungary , it looks a nice place, I stopped and looked on the net and arranged to quickly view a few houses for sale in the next village.

After viewing the houses we were off again , easy trip using the TomTom to Romania , just before Calafat we had another car problem....not the cars fault! , a large stick fell from a lorry and smashed the front window.....still intact but broken i prevented cracks spreading with sticky tape and continued to Calafat to get the ferry. 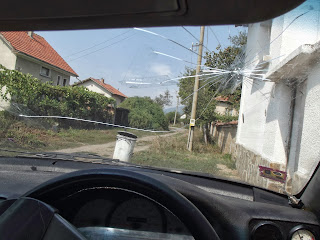 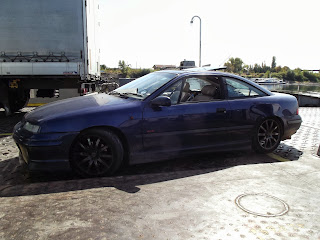 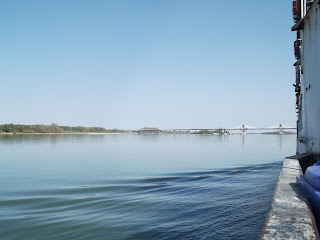 Once in Bulgaria it is only a quick drive to another house i have near Vidin that i use when i go into a factory I have nearby.

I had not been since the fires in the summer, there seems extensive burning in the areas around Vidin on the main route through to Sofia, some bits were still smouldering so it had been burning quite recently. 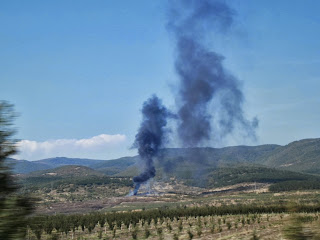 I did a quick unannounced check on the factory and all was fine , I delivered a small filling machine I had brought with me , by the time we unloaded it and bolted it together, it was getting a bit late, I had a quick check on the house and then I drove on.

After a few delays with traffic and diversions it was getting a bit late, about 11pm, I was still about 2 hours away and didnt have the rental house keys, I was supposed to pick them up before it got late....so i stopped in a motorway parking bay on the new motorway from Plovdiv to Kazanlak and slept in the car till it got light, I couldnt drive into any village till people woke up due to the exhaust noise from the car....No silencers, I didnt want to be responsible for waking the village and the animals up!

About 5am I went to my house in Vetren and had some breakfast, Banks were obviously not open yet to change money to Levs so it was garden food..... ready to eat in the garden I had allsorts so I had some strawberries , figs and peaches with oats and UHT milk from the car travel food supplies.

As it got to about 9.30AM, i phoned about the keys for the rental house and arranged to meet up and get them.

Quite an uneventful trip this time, but I did do lots of work on the house in Vetren.

All window frames are now painted and re-glazed, glass taken out, frames scraped, then coated with some sanding sealer ( StarLoc / FiveStar brand sanding cellulose sanding sealer...of course! as I make it! )  , then the frames were sanded down again and then painted with a strange very runny red paint called maistro , looked bad until it dried , but now looks fine 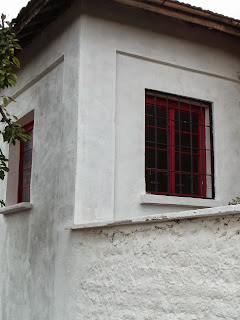 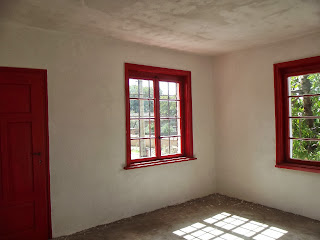 New glass was purchased for every pane, even though all panes look the same size in each window ( 8 panes ) they are all quite different....glass was bonded in place using clear silicone

All gaps around window frames were filled and then half of the outside was painted white, the other 2 walls are being rendered first , inside I touched up a few dents in the plaster with some white plaster i bought from the local diy shop for a couple of lev, inside was then painted
The internal paint was a bit weird again, it looked bad going on, it was clear going on but white in the tub, like wallpaper paste, I left it to dry and it turned bright white....second coat and the 2 bedrooms were finished apart from furnishing and carpets. 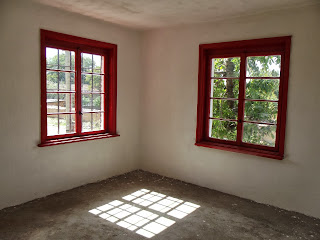 More work on the garden, chopping back trees and elder, digging some roots out, repaired and painted the outside wall and the gate, new glass in almost every window, the couple I didnt replace for now due to shape  ( and lack of glasscutter tools in Bulgaria !) on the door I have put silicone on cracks and over the putty to waterproof till next year

The rest of the trip was made up with looking for another factory building, I eventually found one I could use, very near by this house, massive place, needs about 500 new small panes of glass.....after a few meetings I have agreed to buy it and preliminary contract signed and deposit paid. 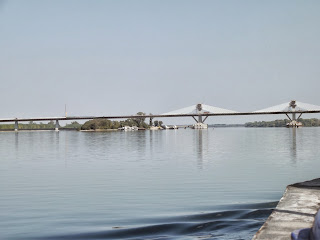 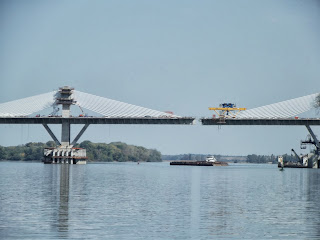 So close to being finished

November 2012, back to Bulgaria again for a few days to finish the deal on the new (old...) factory building , all windows sealed....new glass in soon, just got to get some equipment into it , that will probably the end of next year or so before that happens.
Posted by My-Bulgarian-House-Renovation at Sunday, September 29, 2013 No comments: