At last...The kitchen sink is out!

We have been avoiding going in what was the kitchen....but back in May the time came to fix it!

Last year I spent a few days destroying the old but usable kitchen trying to remove the concrete sink, with no luck! , I left it looking like this......

This year I wasn't giving in, massive hammer and the visor from the strimmer and I set to work.......

It only took about 30 minutes and I could see It was going to move....when, I wasn't sure!

The trick seemed to be to smash the concrete off the wire frame, at first this worked and then it wouldn't smash any more, I put a big crowbar behind the sink and managed to pull it off the wall , once on the floor the hammering as easy , 30 minutes later , just over an hour and I had a pile of rubble and a pile of metal rods.
Only needs a days work to put the walls back in and a day to do the rest, then we have a real kitchen at last instead of the caravan one

Over the last few years the rendering on the very top of the front of the house has been gradually eroding at the corner and with the last lot of heavy rain in April bits started falling off...., the problem is that if not fixed its going to cause major problems eventually, the water runs under the rendering on the wall and all the way down, I rebuilt the top to level and now the rain runs into the gutters at the sides of the house.

First step was to remove anything loose, then every 6 inch in a grid I drilled 3mm holes all over the rendering all the way up the wall.
Next step was to mix up some rapid set epoxy, I used 30 minute set as I had a lot of area to cover with hopefully only one mix , I manufacture the resin I used ( StarLoc adhesives 30 minute set epoxy ) and injected it using a chemical resistant syringe and left it to set , this bonded any loose rendering back onto the wall.

After an hour, it was rendering time, I have been learning to do this.....but still not good at it!
For the walls I used standard ready mixed lime rendering mix and for the very top shaped front of the house I used rapid set concrete, actually `postcrete` as I had some in the van from the UK were I had used it to hold some signs up at the last trade show and had a few bags left over, it is a bit wonky as it started to set...

To fix the very top I needed my new acquisition a 12 meter ladder from eBay, and it took me a few goes to get to the top, I worked on the lower bits first until I got used to working on a ladder, never mind working on a ladder 12 meters up with a bucket of concrete in one hand!

Its more level than it looks! , but very structurally sound , next job is a flick coat of rendering/paint mix over it all to make it all textured the same and white , once its all painted it will look better! 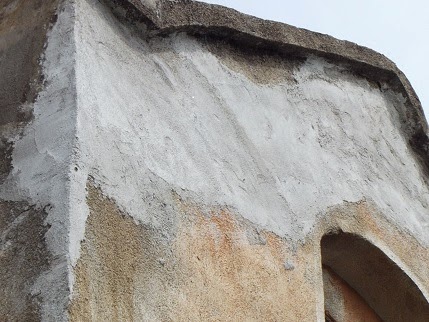 Back to the UK for a few weeks....and now Rabbits!

I have been away from Bulgaria back in the UK for about a month now , I popped back to the UK to go to a few exhibitions and pick up another Van load of things I need.

And now I have Rabbits....I didn't want pet rabbits!

My 2 sheep dogs ( collies ) for the minute stay in the UK while I am away, every day when I'm back we have long walks in the local park around 6am and part of the walk we go through the cemetery to get there.

A few weeks ago in the cemetery I saw something strange out of the corner of my eye about 100 yards away....so dogs back on the lead and off we go to see what it is......

There was a large grey long floppy ear rabbit.....sitting under a tree, as I got closer a White and brown one bounced from behind me and sat next to the other one.

Just by them there was a cardboard pet carrier with the end chewed off so not escaped rabbits , some evil ba***rd had dumped them in an area with foxes and were local wild rabbits have myxomatosis.

Oh...I thought there are foxes here, loads of dogs etc ,local scum bags use the area for killing things with pitbulls to train tem for fighting
We have rescued maybe 20 dogs from this cemetery over 30 years they tie them up and leave them, we have never had any rabbits.

We have had dogs, cats, birds as pets but never rabbits so I knew nothing about them apart from thee fact that foxes eat them and there are foxes living very close to were they were dumped.

Quick trip home with the dogs and back with a towel and a banana box.....wondering if rabbits bite?

As I returned a local dog walker said they had been there a few days and she couldn't catch them.

While these friendly rabbits would let me stroke them, feed them and hopped around after me, they didn't want catching.....
Rabbits are quite quick and slippery....I had soil kicked in my face from under  gravestone....I gave up on the box and used the towel, one at a time to carry them home.

Quick search on the net and a drive to collect......£200 later for the rabbit hutch with  large run straw, hay, food, water bowls etc they are now in the centre of the living room in a 3m by 3m ,2 story rabbit hutch...

After an hour or two they were quite happy and after a few days they were really at home.

They are quite happy now a few weeks later, someone to look after them, maybe they will go to Bulgaria eventually as nobody would take them from me 3 weeks ago so it looks like we are now keeping them.

Very strange animals to choose to give to a child as a pet.....